About The Actuator On A Diesel Engine 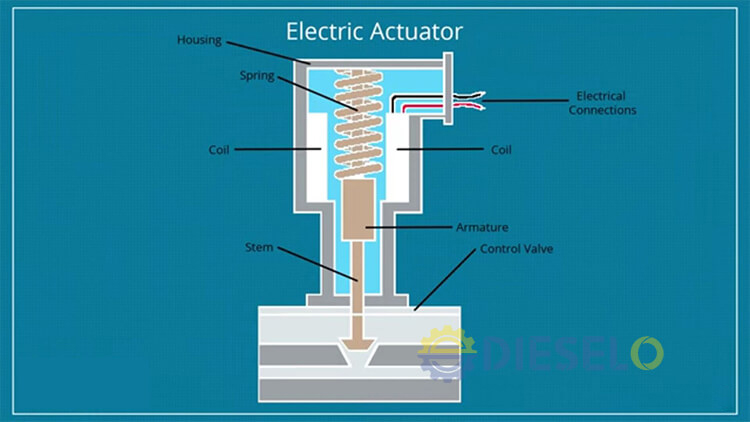 The use of actuators in combustion engines is extremely common. These are devices that control movements or mechanisms and are greatly used in the industrial section. While actuators are nothing special they are an incredible piece of the invention especially in the automotive sector.

In this article, we will discuss engine actuators. And would see their application in diesel engines, their working and what makes them so important.

They are also used in brakes to build pressure, and inconvenience systems for opening doors, fuel caps, boots, etc.

What are the different types of actuators?

Actuators are differentiated in two different ways. One is the type of motion they perform. And another is the source of energy that helps them perform that motion.

So, based on the movement, actuators are of two types.

Linear Actuators: These are the type of actuators that perform linear motion. Meaning actuators can only move forward and backward on a linear(2D) plane. These types of actuators are used in industrial machinery, computers, valves, dampers, disk drives, etc.

Rotary Actuators: A Rotary actuator is a type of actuator that performs rotary motion. This type of actuator can rotate at one fixed point in one direction as long as required. These actuators are used in clamping, positioning, etc.

Based on the type of operation, actuators are of 4 types:

Mechanical Actuator: A mechanical actuator is the simplest kind of actuator. These types of actuators work by converting rotary motion into linear motion. They are operated by using simple gear, pulleys, belts, or physical force. Pneumatic Actuator:  A Pneumatic actuator uses high pressure, air, or vacuum to perform linear or rotary motion. These actuators generally have cylinders or diaphragms where compressed air is used to push the piston in one direction.

To reverse the process, spring or air pressure is used as the counterforce to move in the opposite direction. Pneumatic actuators are one of the most affordable kinds with a lower cost of operations. Electrical Actuator: An electrical actuator is an electrically powered actuator that uses a motor to perform either linear or rotary motion. It converts electrical energy into mechanical energy and uses gear systems like a worm, spur, or scotch yoke to perform the movement.

An electrical actuator uses an AC and DC engine with a synchronous or asynchronous design. Just like mechanical ones, electric actuators are mostly used for opening/closing valves and clamps.

What is an actuator on a diesel engine? What is it used for?

A modern-day diesel engine is a common rail diesel engine that uses precise fuel injection for highly efficient combustion. These engines are mainly controlled by an ECU or ECM that controls all the parameters to create the precise engine output required.

One of the major factors that add to the precision is proper fuel control. This is achieved by using an actuator that controls the fuel supply. A fuel actuator is generally controlled by the governor or the ECU. It is an actuator’s job to regulate the fuel supply as needed.

In older diesel engines and generators, the actuators were controlled by the mechanical governor. The governor depending on the load would move the mechanical actuator and control the fuel supply.

In modern diesel engines, the electronic control unit controls everything. The ECU receives signals from multiple sensors including throttle and pressure sensors. Based on the input the ECU sends a signal to the actuator. The actuator controls the opening of the fuel supply to the high-pressure fuel pump.

What happens when an actuator fails?

Since engine actuators are responsible for fuel supply, a faulty actuator would either decrease the engine performance by not supplying the right quantity of fuel. Stall the engine, or stop it from starting due to no fuel supply. Or decrease throttle response with poor cold start and unstable idling.

Mostly an actuator fails due to a failed valve or worn-out drive nut.  This can happen due to overuse, seizing, or any sort of impurity causing an obstruction. Whatever the issue may be, fixing faulty actuators is easy. But since they are not easily accessible inside the engine bay, it is better to seek professional help when facing such issues.